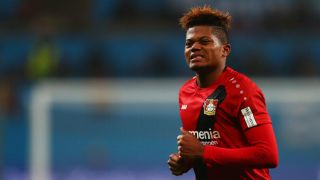 Rudi Voller accepts Bayer Leverkusen will struggle to keep hold of Leon Bailey if he continues progressing and believes only Bayern Munich in the Bundesliga have the power to retain star players as long as they want.

Bailey joined Leverkusen in January 2017 from Genk for a reported €13.5million and initially struggled to make a consistent impact, making just eight substitute appearances in the Bundesliga.

But it has been a different story this season, with the 20-year-old Jamaican scoring six goals and setting up another four in 14 games, establishing himself as a key player in their dynamic frontline.

That form has not gone unnoticed, with Chelsea and Manchester United reportedly keeping tabs on the rapid winger and sporting director Voller is well aware that if a big club does come in for him, Leverkusen may not be able to resist a significant offer.

"At Bayer, we have had players who have aroused great interest and are on the wish list of other clubs for years," he told Die Welt.

"That's why it does not catch us off guard. It would be bad if it did. We are relaxed. The only club that can say no - and would do so - if a player attracted interest is Bayern Munich.

"We and other clubs have to give in. There are limits you can reach, but that's a theme of our policy, independent of Leon Bailey.

"If there is a need for discussion, we all sit down and decide what is best, while also keeping other alternatives open."