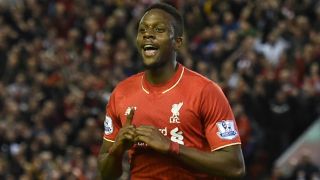 Liverpool striker Divock Origi insists he has not given up hope of recovering from an ankle injury in time for a potential Europa League final.

It was initially feared Origi had sustained a broken ankle after being subjected to an overzealous challenge from Everton's Ramiro Funes Mori during Liverpool's 4-0 derby win last month.

However, while scans cleared the Belgium international of a fracture, the 21-year-old sustained ligament damage keeping him out for several weeks.

Liverpool will host Villarreal on Thursday in the second leg of their Europa League semi-final tie, with the Spanish side holding a 1-0 advantage.

Origi revealed he is making progress with his injury and, when asked if he could yet return before season's end, the forward told the club's official website: "Of course, I believe in it.

"My goal is to come back as soon as possible and I just want to go back on the pitch. I think it's possible, but you never know.

"It's progressing well. It's been 10 days now so I try and improve every day and make steps. We just try and [ensure that] I'm back as quick as possible.

"For example, yesterday and today I feel a big difference, with these injuries it can evolve every day and we put in a lot of work.

"I come into [Melwood training ground] very early and I leave in the evening, so we [work] a lot of hours, but I think that's necessary because I want to come back as soon as possible."

Origi had been one of Liverpool's key performance before sustaining the injury, having scored five goals in his last six appearances.

On his form, Origi said: "When you get a lot of love you're grateful and you try to repay this.

"It makes me work so hard, it gives me energy to work hard on my rehab and give everything to be back on the pitch and help the group.

"I just hope that things will go quite fast.

"I always want to be on the pitch and now these games that are coming are important and everybody wants to take part in them.

"Sometimes that's life, you have injuries, but I'm using this time to make myself stronger always and [to become] fresh mentally, and I hope I come back strong."