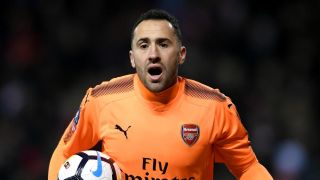 Colombia international Ospina has been Arsenal's regular goalkeeper in cup competitions since Petr Cech's arrival from Chelsea in 2015, and Wenger insisted there is no temptation to select the veteran Czech with silverware on the line.

Speaking at a news conference ahead of Thursday's Europa League match at home to Ostersunds, where Arsenal carry at 3-0 lead over from the first leg, Wenger confirmed Ospina would be his first choice for both matches this week.

"It's always a difficult decision but I think we are clear about that since the start of the season," he said.

"He [Ospina] played in the whole competition.

"I have two world class goalkeepers and I decided from the start to have clarity in the way we play and I will continue that."

The manager says will start in and in the final February 21, 2018

Ramsey has proved a Wembley specialist for the Gunners, scoring the winnings goals in the 2014 and 2017 FA Cup finals against Hull City and Chelsea respectively.

The Wales international is back in training but faces a race against time to fully overcome a groin problem and face City, although Wenger is more confident Ozil will overcome the effects of a bout of illness.

"He [Ramsey] is not in the squad tomorrow. He had a good training session but he is a bit short for tomorrow," said the Gunners boss.

"We'll see how his evolution goes now from today until Sunday. I don't rule him out yet. It depends how well he can improve his intensity of training until Sunday."

On Ozil, Wenger added: "Mesut [has been] sick until today. He was in bed Monday, Tuesday for sickness.

"I would certainly have played him but because he was sick he will have to work hard tomorrow and will not be involved in the game. He should be okay for Sunday."

Wenger will be without record signing Pierre-Emerick Aubameyang for the rest of the Europa League campaign due to the former Borussia Dortmund striker being cup-tied and Henrikh Mkhitaryan for the same reason at Wembley.

Asked whether the rule should be re-examined, Wenger suggested there is a groundswell of support among European clubs to confine it to the dust bin.

"It will be, I think," he said. "There is a swathe underneath with all the clubs who fight against that now.

"In the middle of the season to be frustrated like that doesn't look right. When you look at the amount of money that is in involved now with the transfers, it is very difficult to defend.

"Everybody in Europe want this rule to be changed."