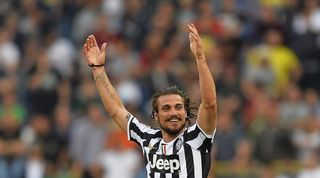 The Southampton striker arrived in Milan on Monday as he moved a step closer to securing a return to Italy, having spent the second half of last season on loan with Juventus as Antonio Conte guided them to a third Scudetto on the bounce.

With new Southampton boss Ronald Koeman keen to sell the 28-year-old after he failed to report back for pre-season training, Osvaldo is looking ahead to a new challenge.

"I am very happy to be at Inter," he is quoted as saying by the Gazzetta dello Sport. "Now I have to have my medical before signing, so I don't want to say too much in case of bad luck.

"I hope to do well with my team-mates, and form a partnership with [Palacio and Icardi] for the sake of Inter.

Osvaldo, who is Southampton's record signing, arrived in England from Roma last August but only managed three goals in 13 Premier League appearances before falling out of favour.