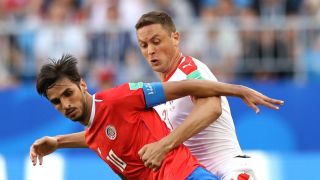 Costa Rica captain Bryan Ruiz insists that his uncertain club future will not prove a distraction during the World Cup.

The 32-year-old's contract at Sporting CP expired at the end of the 2017-18 season after a three-year spell with the Portuguese side.

Ruiz featured in Costa Rica's World Cup defeat to Serbia on Sunday and is adamant that his focus is solely on leading his country at Russia 2018.

"The Sporting situation isn't in my mind," he said.

"I am out of contract so I have no problems with any of that. I will take my decision on the next club after this World Cup and that's the only thing.

"I prepared myself as best as I could. I felt good going into this tournament."

Costa Rica face a daunting Group E clash against Brazil on Friday knowing defeat would all-but prevent them from reaching the knock-out stages.