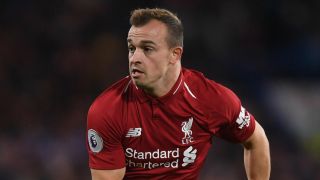 Liverpool manager Jurgen Klopp is convinced Xherdan Shaqiri still has plenty of untapped potential as the "logical" signing begins to find his feet.

Switzerland international Shaqiri has started two successive matches and starred in both, notching assists in the victories over Huddersfield Town and Red Star Belgrade.

Those performances have resolved concerns as to how the enigmatic former Bayern Munich man would fit with Liverpool's high-intensity, counter-pressing playing style.

Klopp described Shaqiri's willingness to adhere to new defensive demands as "nice to see" while praising the different dimension he has brought to the Premier League title hopefuls.

"I don't think anybody has an idea at the moment how good Shaq can be. It's not a criticism, it's just how it is," Klopp said.

"I knew him when he was 19 at Bayern and he was already an outstanding talent. He had a good first year. Second year he wasn't that good, but that can happen. Then he left.

"You can disappear a bit. Inter Milan and then Stoke. Thank God, he didn't disappear.

"He always had his moments. When I asked for us to cut a few scenes of Shaqiri, nobody said: 'Come on, Shaqiri? Really?'

"Then when we cut them together it was really impressive with how decisive he was in these situations. Even when he didn't score, he stayed in games.

"Signing him was a logical thing to do. He's still not the finished article. He still has a lot of space for improvement and that's really good.

"He gives us something different. So far we haven't really used his set-pieces but they are outstanding. That's another plus."