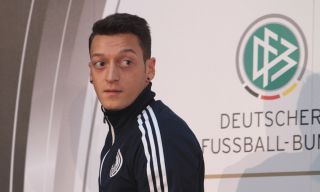 Real supremo Florentino Perez claimed that Ozil had requested his transfer-deadline-day switch to the Premier League as he "could not stand the pressure of Madrid".

However, the Germany international looked to draw a line under the issue, stating that he was happy with his contribution during his stay at the Bernabeu.

"First of all, I had three wonderful years in Madrid, I don't want to add anything on that. I am now at Arsenal, and very happy," he said.

"If you see my figures (in Madrid) and how many matches I played there, then you can also see my professionalism. I don't want to say more about it."

Ozil has made a flying start to life at Arsenal, assisting five goals in six games to help Arsene Wenger's men move to the top of the Premier League and UEFA Champions League Group F.

"For me personally the Premier League is the strongest, it is well balanced. You have many top class clubs," he said.

"I think it's a nice experience to play abroad. You get to learn a new culture and new language, you improve a lot as a person.

"That's why I am happy to have another new experience in England. I really think this league will suit me well."