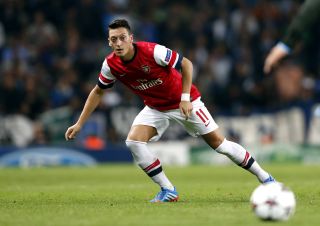 The 25-year-old was withdrawn eight minutes from the end of Germany's FIFA World Cup qualifying win over Sweden on Tuesday after picking up a knock to his right knee.

While there were concerns the former Real Madrid playmaker could miss the visit of Norwich, Wenger confirmed that he is fit along with Bacary Sagna and Santi Cazorla, who had been suffering from hamstring and foot injuries respectively.

"Ozil, Sagna and Cazorla are all fit. Everybody else looks fit and ready," Wenger said.

Ozil has provided assists for four goals in six games for Arsenal since arriving from Madrid for a club-record fee on the final day of the transfer window.