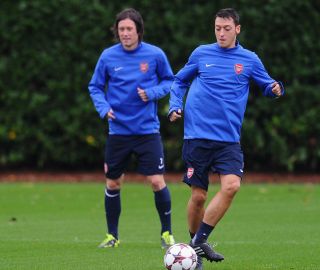 The Czech midfielder's deal expires at the end of the season, but manager Arsene Wenger recently hinted the 33-year-old would be offered an extension to his deal.

And Ozil - who moved to the Premier League leaders from Real Madrid on September 2 - believes the former Borussia Dortmund man is a valuable asset to the squad.

Speaking to the club's official website, the Germany international said: "We are similar types of player. We're strong when we're on the ball, we play quickly and I have lots of fun playing alongside the team.

"In my opinion Tomas belongs to the best midfielders in the Premier League. When you see how much he gives for the team and how he enjoys being on the ball it makes us happy to have a player like that in our ranks."

Ozil has settled into life at the Emirates Stadium well, notching four goals in 16 Premier League appearances, and becoming an integral part of an Arsenal side that has produced a series of sparking attacking performances.

And the 25-year-old noted his joy at playing for such a fluid outfit.

He added: "Before I came to Arsenal, I knew that the club belonged among the top five in Europe.

"I knew that they were technically gifted and strong and you see that on the training ground when we are doing passing drills - the ball is always moving.

"I think that's thanks to the way young players are coached at the club because they always train with the ball, run passing drills and ultimately it's being rewarded."