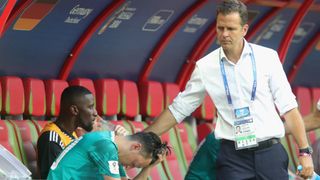 Team manager Oliver Bierhoff has admitted Germany should perhaps have "passed" on Mesut Ozil and not taken him to the World Cup.

A day prior to the squad being announced, Ozil and team-mate Ilkay Gundogan, who are both of Turkish descent, were photographed with controversial Turkish President Recep Tayyip Erdogan.

The move caused a storm in Germany with the two players subsequently booed by German fans in a series of pre-World Cup friendlies.

"We should have considered passing on him," Bierhoff told Die Welt. "We have never forced national team players to do something, but rather always tried to convince them.

"We failed to do that with Mesut. And thus, we should have considered passing on him for sporting reasons.

"I believe the fact that Mesut and Ilkay took the pictures did not distract the squad so much. But the debate afterwards did. In hindsight, I should have tried to handle the issue more clearly."

The inquest into Germany's squad selection has followed their dramatic failure in Russia.

Germany, the defending champions, finished bottom of a group containing Sweden, Mexico and South Korea - the first time a German team had failed to progress from the group stage since 1938.

Ozil played in the opening-game loss to Mexico, but was dropped for the win over Sweden, before returning for the loss to South Korea.

In the final game he created seven chances from open play, the most of any player in the tournament, but could not prevent his team from losing.