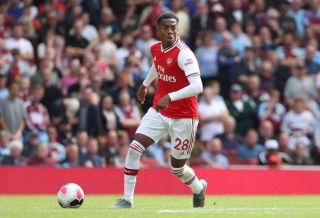 Mesut Ozil has told Arsenal’s rising stars Joe Willock and Reiss Nelson to keep believing in their own ability as Unai Emery’s squad look to maintain an impressive start to the new campaign.

Midfielder Willock, 20, and forward Nelson, 19, have started both of the Gunners’ opening Premier League matches.

Head coach Emery could opt to make changes for the trip to Liverpool on Saturday, where his side will aim to make it three straight wins.

Ozil feels keeping focused on what got them into the first team will help them overcome the many personal challenges ahead.

“I just want to say that the most important thing is to believe in yourself,” Ozil told Arsenal Player.

“Of course you have some days when it doesn’t go so well, but you have to believe in yourself, keep working and the most important thing is to have fun.

“If you don’t have fun, if you are losing and you make mistakes you will be disappointed. But don’t listen to anyone, you know how good you are, believe in yourself and have fun.”

Former Germany international Ozil has yet to feature for Arsenal this season.

Along with team-mate Sead Kolasinac, the 30-year-old was a victim of an attempted car-jacking last month and did not travel to Newcastle for the first match of the new campaign as the police investigated “further security incidents”.

Ozil then missed last weekend’s win at Burnley because of illness.

Having come through the youth ranks at Shalke to go on and play for Werder Bremen and then Real Madrid before joining Arsenal in September 2013, Ozil knows just how challenging continued progress for a talented youngster can be.

“I was nervous (when I entered the first-team dressing room at Schalke), but also excited because it was the first time I spent time with the players,” he said.

“I was very, very quiet. I didn’t speak a lot in the dressing room, I was just looking to the left and the right and couldn’t believe I was here now playing with them. It was a great moment for me.

“I was just looking and thinking, ‘Oh my God, now I am here! Now I have to show my quality’.

“It was easier for me to show my potential on the pitch because they all helped me a lot. They stood behind me, so I was able to just enjoy playing football.”

Ozil added: “I was always giving everything to play in training, and after that if I’m not in the squad, or didn’t play those players always came to me and showed their respect.

“They spoke to me and told me I have a lot of quality, be calm, believe in yourself and your time will come.”