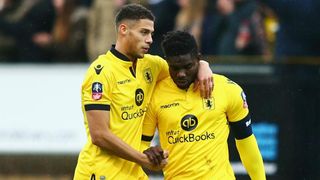 Crystal Palace must ensure that struggling Aston Villa do not get a sniff of momentum when they play in the Premier League on Tuesday, assistant manager Keith Millen says.

Villa have had a terrible 2015-16 campaign, winning only once from 20 league games to sit bottom of the table, while captain Micah Richards clashed with supporters after they were held to a draw by League Two Wycombe Wanderers in the FA Cup last time out.

Palace, meanwhile, are seventh and go into the game on the back of a cup win at Southampton, with Millen wanting to grind down their opponents when they meet at Villa Park.

"We need to get off to a good start and if there is a volatile atmosphere there we don't want to give them any sort of encouragement to get behind the Aston Villa team," he said.

"Fair enough to Micah Richards to brave the fans and try and explain the situation to them. I don't know what was said but he is certainly passionate about Aston Villa and what is going on and it is hurting him.

"The main thing from the fans' point of view is that they want to see the players going out there fighting for the cause of the club and they have got every right to express their feelings.

"They are under pressure and they desperately need a win. We have been there at the bottom of the league but fortunately managed to get ourselves out of it, so we know what that pressure is like.

"You are looking for something in the game to cling on to - whether it is the first goal or something to get the crowd involved - so we have to make sure we are ready for the start of the game.

"We have done our homework on them. They are trying to get a winning formula, so I can understand why they have changed systems.

"They have got some good players, Villa. Remi Garde is trying to find a winning formula and we have got to guess what that is going to be and win the game.

"Our away form for a year now has been good. We have got a set-up where the players can hurt teams away from home."