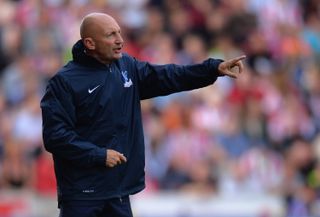 Palace have opened their Premier League campaign following promotion with a 1-0 defeat to Tottenham and a 2-1 loss at Stoke City on Saturday.

Marouane Chamakh had given the visitors the lead at the Britannia Stadium, but Holloway's men were left to rue conceding two goals in four second-half minutes as Stoke turned the game on its head.

Holloway said: "It was tight and close and I was quite pleased with certain things.

"But with their first goal, I felt we got it wrong as a group. We didn't get organised.

"Then for the second one, Chamakh tried to toe-punt it out, they made a tackle and it has rolled straight to them.

"When you look at those goals, I am disappointed because we played better than that, but that is this level."

Palace are in League Cup action in midweek against Bristol City before welcoming Sunderland to Selhurst Park next Saturday.