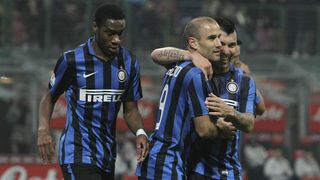 Rodrigo Palacio has signed a new contract to keep him at Inter until the end of the 2016-17 season.

The 33-year-old has only made six starts in Serie A this term but he remains a firm favourite of head coach Roberto Mancini, who described him as "a great professional" earlier this week.

The Argentina international, who joined the club in 2012, has ended speculation over his future by agreeing to a new deal and says he is relishing the prospect of continuing at San Siro for the next 18 months.

"Internazionale announce we have renewed the contract of Rodrigo Palacio until June 2017," the club stated on Friday.

Palacio added: "To continue to fight in this shirt is something unique, so I'm very happy and I can't wait to take to the field for the great challenges this season has to offer.

"I thank Inter and the fans."