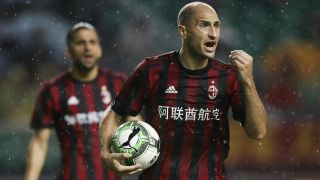 The 32-year-old had been a free agent since terminating his contract with Milan by mutual consent in January.

Paletta, who won three international caps for Italy in 2014, fell out of favour under Vincenzo Montella this season and managed only a lone Europa League appearance for Gennaro Gattuso.

Born in Argentina, he had a brief stint with Liverpool between spells at Banfield and Boca Juniors.

The centre-back joined Parma in 2010 and went on to represent the Azzurri at the World Cup in Brazil, featuring in the group stage win over England.

Paletta will line up alongside ex-Chelsea midfielder Ramires in Capello's squad.