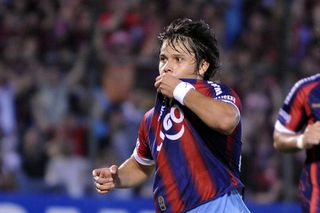 The victory took Cerro Porteno into fifth in the table with 24 points, ahead of Nacional Asuncion on goal difference, while Libertad remained on 36 points but cannot be overhauled by second-placed Guarani, who crushed Rubio Nu 4-1 to reach 30.

At the Estadio General Pablo Rojas, Porteno grabbed an early advantage after Romero struck twice in the opening 25 minutes.

The 21-year-old forward showed impressive control for his first goal in the 18th minute, bringing down a high ball in the box, before cutting inside his marker to score, while Romero's second seven minutes later came after Libertad's goalkeeper parried another shot into the youngster's path.

It was 3-0 four minutes into the second half when Alonso nodded a free-kick home from close range, while dos Santos converted a penalty in the 88th minute to complete Porteno's victory.

On Saturday, Guarani moved four points clear of third-placed Olimpia after coming from behind away to Rubio Nu.

Francisco Gomez gave the hosts the lead in the 18th minute but Guarani stormed back in the second half with Rafael Benitez scoring the equaliser just before the hour mark before Julio Caceres, Fernando Fernandez and Marcelo Palau completed the visitors' triumph.

After Olimpia lost 2-1 at Capiata on Sunday, Guarani were assured of second position.

Sol de America moved within a point of Olimpia thanks to a 1-0 win at 3 de Febrero, Sportivo Luqueno were held to a scoreless draw by General Diaz and bottom club 12 de Octubre drew 1-1 with Nacional.