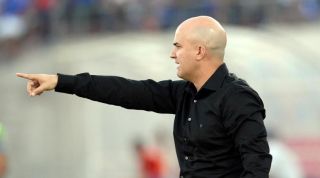 The Argentine midfielder trapped a half-clearance from the Cerro defence, before he danced past a defender and buried a shot from outside the area into the left side of the net past a diving Diego Barreto in goal.

The visitors doubled their lead in the 35th minute, Eduardo Filippini finishing a fine move from their own half after Fernando Fernandez laid a ball out to the right from the top of the area.

Fernandez got on the scoresheet himself in the 62nd minute, powering past a hapless Barreto after being released behind the Cerro defence.

Libertad and Olimpia kept up the pressure on the Clausura pace-setters with respective victories.

Olimpia came from behind to down Sol de America 2-1 on the road, with Juan Salgueiro's 78th-minute penalty cancelling out a first-half spot-kick from Aureliano Torres.

Javier Acuna then scored the winner for Olimpia with seven minutes to play, to leave them on 10 points, goal difference behind second-placed Libertad.

Libertad were rampant 5-1 winners at home to winless Rubio Nu, who have lost four in succession.

Sportivo Luqueno sit in fifth, one point behind Asuncion, after a 2-1 win over 12 de Octubre.

All three goals came in a six-minute period in the second half, Derlis Alegre finishing the scoring in the 75th minute.

A Cesar Caicedo brace fired General Diaz to a 2-0 win over Deportivo Capiata which saw them end a three-match losing run.