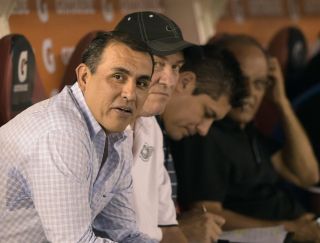 Pedro Sarabia's men have a two-point buffer on second-placed Cerro Porteno, with Libertad on the brink of winning both titles in the same calendar year for the second time since the format was introduced in 2008.

Libertad were 1-0 winners over Sportivo Luqueno - Antonio Bareiro scoring the winner for the Apertura champions.

Daniel Guiza scored the game's only goal in Cerro's 1-0 victory over Nacional Asuncion, to keep alive their title chances heading to next weekend.

Libertad are away at Nacional Asuncion, while Cerro visit Sol de America.

Should the two clubs finish level on points - a Libertad draw and a Cerro win would tie them on 44 - a play-off game will take place for the title.

And Libertad will head to the weekend with a few nerves, having drawn their past two with Asuncion.

High-scoring Guarani will finish no lower than third, after beating Olimpia 4-2.

A hat-trick to Federico Santander - who moved second on the goal-scoring list with 10 goals, behind team-mate Fernando Fernandez with 16 - powered Guarani to victory.

Rubio Nu climbed off bottom with a 1-0 win at home to 3 de Febrero, leaving 12 de Octubre at the foot of the table - after the latter drew 0-0 at Deportivo Capiata.