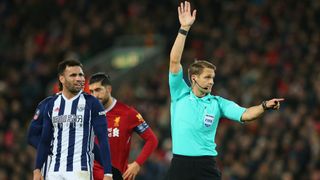 West Brom boss Alan Pardew blamed VAR for causing injuries to his players and confusing the fans in his side's 3-2 FA Cup win over Liverpool at Anfield.

The video referral system was used to overturn a goal for Craig Dawson and award a penalty for a foul on Mohamed Salah in a frenetic first half on Saturday.

Both decisions appear to have been correct, but the delay in the action while referee Craig Pawson waited for feedback from the video assistant, as well as the uncertainty for supporters in the ground, led to more criticism of the way the technology is used.

Pardew felt the stoppages contributed to muscle problems for his players, with Hal Robson-Kanu and Kieran Gibbs both forced off in the first half and Jonny Evans and Jake Livermore struggling in the closing stages.

He also believes the use of VAR could sap some of the entertainment from matches, even if the decisions are ultimately right.

"It's hard to know where to start," he told a news conference when asked about the incidents. "You guys are all experienced reporters and have seen many games but I don't think that's what you want to see going forward.

"If you're a Liverpool fan or a West Brom fan, there's no communication from the referee to us, like in the NFL. We didn't know what the decision was, why it was being stopped.

3 - West Brom are the first away team to score three first half goals at Anfield since Real Madrid in October 2014. Galacticos. January 27, 2018

"He reverses the Dawson goal and I think that, were it not for the system, would never be disallowed in any league game. The fourth official told me it was for offside, which is a bit of a surprise from a corner. I've looked at it and it's marginal, really marginal.

"I think there's a question there; are we going to start taking goals away from the entertainment of the games on those slight margins? I think that's a worry.

"The second one, you can argue Jake has lifted his arm to stop him. Would Salah have got it, in a normal game without VAR? I don't know.

"The bigger worry for me is it was four minutes, maybe five for the decision, so you're going from a high-tempo work rate to nothing. We had a hamstring [injury] just after that.

"I think our fans started singing, 'it should've been four'. Whether they'd seen it on the phones after, or something. Because of social media, it gets flashed down the line, so do you really want fans to get it third hand or do you actually want to know in the stadium?

"As a football person, on the sideline, I wasn't comfortable with that first half. It was kind of mysterious at times."

The use of VAR somewhat took attention away from a fine West Brom performance, in which they responded to Roberto Firmino's early opener through a double from Jay Rodriguez and an own goal by Joel Matip.

The visitors were under pressure late on after Salah halved the deficit but Pardew was delighted with the bold performance from his players.

"I didn't enjoy the last period of the game, when we had two players struggling with hamstrings and no subs, but other than that I did," he said.

"It was a really professional and positive performance from us. We played without fear, which you have to do here. I thought Jurgen [Klopp] would go very, very strong and I thought it was important we didn't sit deep and we carried a threat. Jay and Hal did it better than I could have imagined."