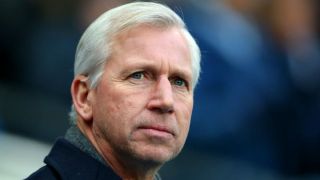 Alan Pardew defended his Crystal Palace side after being beaten 4-0 by Manchester City, although he warned goalkeeper Wayne Hennessey that he needs to respond quickly after making a mistake for the second game running.

Sergio Aguero netted twice and Fabian Delph and David Silva were also on the scoresheet in a comfortable Premier League victory for title-chasing City at the Etihad Stadium on Saturday.

"That was not a terrible performance from us. We've threatened the goal, which is a positive," said Pardew, who watching his Palace players fail to score for a fifth successive league match.

"It was a strange game really. I've brought many teams here, it's very difficult to win here.

"This result doesn't reflect what went on on the pitch."

After Hennessey's error - Delph's 30-yard drive skidded underneath the Palace goalkeeper after he saw it late - Pardew wants the Wales international to prove he is worthy of his place in the starting XI.

"A mistake at [Aston] Villa [on Tuesday], he needed to respond [on Saturday] and made another mistake," Pardew said.

"The ball is in his court to keep out the other two goalkeepers but I need to see it in training, I need to see a reaction from him. I will give him that chance because he deserves it."

Aguero took his tally to 10 Premier League goals for the season and Pardew said: "Aguero did create some lovely moments, but he wasn't red hot! Most of their shots went in, it wasn't as if we were peppered."