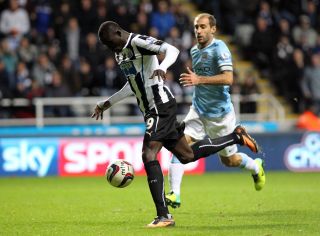 Misfiring Newcastle frontman Cisse was prolific when he first arrived at St James' Park in January 2012 and added another 13 goals for Pardew's side last season.

But the Senegal international has not found the back of the net in the Premier League this term, scoring just once in a League Cup win over Leeds.

Cisse missed a golden opportunity to double his tally for the season in Wednesday night's League Cup tie with Manchester City, which proved to be costly as Manuel Pellegrini's side went on to secure a 2-0 win.

Pardew revealed that Cisse was low on confidence after his miss against City, but cited in-form Chelsea striker Torres' resurgence as proof that his fortunes could soon change.

Spain striker Torres has scored three goals in his last two games and Newcastle will have to be wary of him when the two sides meet at St James' Park on Saturday.

"He always gives everything for us but that seemed to hurt him, that he didn't take that chance.

"He wasn't quite the same after that. But that's what it's like for strikers and he's got to keep going.

"And if there's ever an example of coming out of this spell, it's Torres who's suddenly come alive. We've got to hope that happens for Papiss."