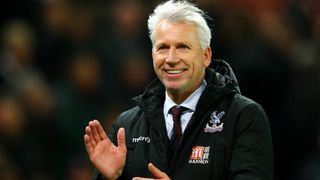 Crystal Palace manager Alan Pardew is in talks with the ambitious Premier League side about a new contract as he looks to deliver silverware.

Pardew arrived at Selhurst Park a year ago, with Palace languishing in the bottom three before the former Newcastle United boss guided the team to a 10th-place finish last term.

The 54-year-old, who signed a three-and-half-year contract when he joined, has continued where he left off this season, Palace flying high in fifth position after 19 matches and the Englishman wants to turn Londoners into permanent trophy contenders.

"The reason I am talking to them about a new contract here is because I feel we could go forward," he said.

"There is no point in me staying if I don't have the ambition.

"At this time of my career, I need to win trophies - that is probably the thing that you can hold against me as a manager, so I want to win trophies.

"When I came here the most important thing was to go from the concept of a manager who was trying to stay in the division - which I think Neil Warnock's mentality was - to a manager who wanted to finish higher than that.

"If you set your sights for the stars, you are going to fall a little bit less.

"The biggest difference I made here was changing the mentality of the players to make them think they could go and win.

"It's quite an important role for a manger, to give belief. I take that as massive for this football club at the time. I think there was a lack of belief.

"I changed the dynamic of the players and the attitude of approaching games. To go and win games and not a 'see how we go' kind of attitude to try and stay in the game."