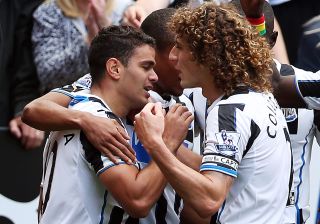 The 26-year-old broke the deadlock in the 18th minute with his second goal in as many Premier League games, slamming home after some fine link-up play from compatriot Loic Remy.

Christian Benteke equalised mid-way through the second half before midfielder Ben Arfa had a helping hand in Yoan Gouffran's winner 17 minutes from time.

The Frenchman's initial long-range effort was parried by goalkeeper Brad Guzan, only for Gouffran's quick reactions to secure Newcastle's second league win of the new campaign.

And for Pardew, Ben Arfa's performance left him beaming, and prompted him to suggest it could be a pivotal season in the former Marseille man's career with the 2014 FIFA World Cup now just nine months away.

"We carried a lot of offensive threat. We haven't had enough threat, but we've got it now. Hatem Ben Arfa got a lot of headlines last time he scored against Fulham but I thought he did just okay then," the Newcastle manager told BBC Sport.

"He was unplayable (against Villa). Hatem was on fire.

"He has the ability to hold on to the ball and give us a rest, then burst past one or two players.