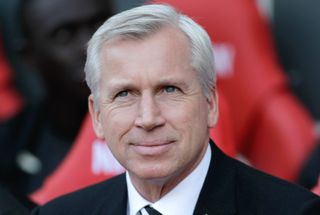 Pardew's men welcome City to St James' Park on Wednesday following a 2-1 loss to their bitter rivals at the Stadium of Light last Sunday.

The result, sealed by an 85th-minute Fabio Borini stunner, marked the first time that Newcastle have suffered consecutive defeats to Sunderland since 1967.

Still, Pardew believes they deserved something from that game, and is looking for his team to bounce back against City as they aim to progress to the quarter-finals of the League Cup for the third time in the 21st century.

"I genuinely believe we were the better team, but we got beat," he said. "But it is a result that carries a great deal of emotion in this city and you have to accept it.

"This year it (the League Cup) is a priority because we want to win a trophy for our fans. It will be a good way of putting behind the disappointment of Sunderland against Man City.

"If we can get past Man City, but that is easier said than done."

The result at Sunderland has only increased the pressure on Pardew and controversial owner Mike Ashley, who has seen fans protest against his regime this season following a close-season in which the club signed just one senior player.

Pardew revealed he did speak with Ashley after Sunday's disappointment, insisting that the owner does have the best interests of the club at heart.

"We had a brief message to each other," he added. "But it was all in the right manner.