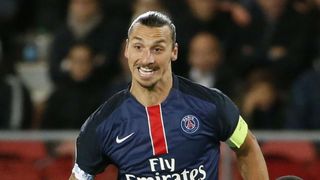 Zlatan Ibrahimovic ended his recent goal drought as well as seeing a late penalty saved as Paris Saint-Germain cruised to a 3-0 win over Guingamp in Ligue 1 on Tuesday.

The Sweden international netted his first club goal of the season - at the fourth attempt - for the French champions just as it looked as though he was going to be left exasperated on an otherwise straightforward evening for PSG.

After two draws in their previous league outings, there was a danger the crowd at Parc des Princes could have grown impatient with Laurent Blanc's men, but a star-studded team quickly settled any nerves around the stadium and the result rarely looked in doubt.

Javier Pastore slotted a cool finish home from the edge of the box to make it 1-0 after just 18 minutes, and the lead was doubled by Angel Di Maria's close range finish in the second half.

Ibrahimovic delighted the home fans in the 83rd minute with a brilliantly taken goal, and he could have doubled his tally for the season had it not been for the exploits of Guingamp goalkeeper Jonas Lossl, who pulled off a late penalty save.

Laurent Blanc restored some star quality to his starting line-up, with David Luiz returning to action, as well as Blaise Matuidi, Di Maria and Edinson Cavani stepping up after being named as substitutes in PSG's previous Ligue 1 outing – a disappointing 1-1 draw at Reims.

That set the tone for the evening, and PSG soon took the lead.

Ibrahimovic darted through midfield and picked out Pastore on the edge of the box, who stroked a side-footed shot between two defenders and into the corner of the net, past the diving Lossl.

The Sweden star came tantalizingly close to doubling the lead when he met Maxwell's pass with a first-time left-footed chip that just curled away from the target.

The second half began with an onslaught on Lossl's goal, and Ibrahimovic's low, 25-yard free-kick bounced off the keeper's chest, shortly before a last-ditch clearance from Laurent Dos Santos denied the increasingly frustrated striker.

Pastore almost doubled his tally when he robbed Moustapha Diallo of possession and scampered into the box, where he plundered a shot that forced a good save from Lossl.

Di Maria grabbed a share of the glory courtesy of an Ibrahimovic shot that Lossl spilled at his feet, allowing the former Manchester United man to tuck away his first league goal for PSG.

Ibrahimovic finally got on the scoresheet when Di Maria's pass picked him out in the box, and he needed just two touches to fire in past Lossl at the far post, however he could not repeat the feat from 12 yards after Cavani was brought down.
Elsewhere in Ligue 1, Reims were held to a third successive draw after their visit to Angers ended goalless.