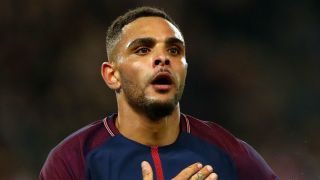 Layvin Kurzawa hit a second-half hat-trick as Paris Saint-Germain booked their place in the last 16 of the Champions League with a dominant 5-0 win over Anderlecht at the Parc des Princes.

Unai Emery's side have been in imperious form in Group B and have won all four of their games, scoring 17 goals and conceding none.

They now have an unassailable nine point lead over third-placed Celtic after their 2-1 defeat to Bayern Munich, but will want maximum points from their final two games against those sides to confirm top spot.

Neymar missed a glorious opportunity to open the scoring in the first minute before Marco Verratti's first goal of the season after 30 minutes broke the deadlock.

The world's most expensive player then scored his 11th goal since his move from Barcelona with a fine long-range finish on the stroke of half-time. Kurzawa then stole the show in the second-half, scoring his first career hat-trick to add a deserved gloss to the scoreline.

The only negative for PSG will be Edinson Cavani's failure to get onto the scoresheet, which brings his run of scoring in seven consecutive Champions League matches to an end.

PSG started at a blistering pace and should have been ahead inside just 30 seconds. Kylian Mbappe released Neymar behind the visitors' defence, but the Brazilian's effort was too close to Frank Boeckx, who was able to block.

The Anderlecht goalkeeper then twice got down well in quick succession to deny Julian Draxler and Mbappe, who both drilled in low shots from almost identical positions on the edge of the penalty area.

It took until the half-hour mark for the hosts to score the goal their superiority deserved and it came from an unlikely source.

The impressive Mbappe found Verratti inside the area with an exquisite disguised pass, the Italian checking back inside his marker before whipping a composed finish into Boeckx's far corner for just his seventh goal in five years since joining from Pescara.

Draxler played a short corner to the 25-year-old, who moved towards a more central position to whip a fierce effort past the flaccid resistance of Boeckx's outstretched palm.

Neymar started the second half in equally vibrant fashion, crashing a 25-yard free-kick against the post which rebounded kindly to Kurzawa, who hooked home a third into an empty net.

Anderlecht nearly pulled back an unlikely goal just after the hour as Ivan Obradovic unleashed a long-range effort, which fizzed narrowly over Alphonse Areola's crossbar.

Kurzawa scored his second in the 72nd minute, heading home at the back post from Alves' cross, and completed a memorable hat-trick six minutes later with a drilled finish to ensure the Parisian's finished with a scoreline reflective of their dominance.