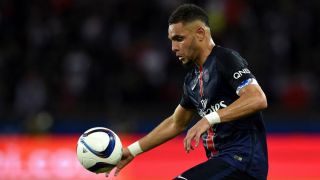 Layvin Kurzawa has warned his Paris Saint-Germain team-mates over Angers' strength on the counter-attack ahead of Saturday's encounter at the Parc des Princes.

The reigning Ligue 1 champions have been in stunning form this season and sit atop of the table with 57 points from 21 games, winning on 18 occasions and drawing just three.

Kurzawa stated earlier this campaign that PSG aim to remain unbeaten in Ligue 1 all season, but he knows they cannot afford to take Angers lightly at the weekend if they are to extend their unbeaten run to 31 games.

"I think all the players that are part of Angers' team know each other very well," Kurzawa told the official PSG website. "They have a great group of players and a very solid core.

"They have some very good players, who are incredibly dangerous on the counter-attack. We have to be wary of their quick breaks.

"Plus they have a solid midfield as well. It is up to us to make sure we press them well.

"PSG have huge goals and that's one of the reasons why I joined. With this team and these players, nothing is impossible."

Laurent Blanc's men will fancy their chances of getting a good result against Angers following their recent good run against Saturday's opponents.

The Paris side are unbeaten in their last 11 league games against Angers (winning four and drawing seven), after losing three of the first four.

However, they had to settle for a goalless draw when they met Stephane Moulin's men at the Stade Jean Bouin earlier this campaign, the only time the men from the capital have failed to score in Ligue 1 so far in 2015-16.

Blanc has a number of injury worries ahead of the match against Angers, with Thiago Silva (knee), Marco Verratti (groin), Javier Pastore (calf) and Marquinhos (hamstring) all nursing physical problems.

Angers, meanwhile, will draw confidence from that result back in December, but their recent form gives little reason for optimism. They have lost two of their last three league games (against Saint-Etienne and Nice), as many as in their previous 13.

They still sit third in the Ligue 1 table, though, with 34 points from 21 games and will be desperate for a good result in order to prevent them from slipping further down the table.

One of Angers' biggest strengths has been their superb defensive record, with only PSG (nine) conceding fewer goals than Moulin's side (13).

- PSG have registered 57 points in their first 21 Ligue 1 games in 2015-16; their highest ever tally at this stage.
- Paris are the only team still unbeaten in the top five European leagues this season.
- PSG (13) and Angers (12) have kept more clean sheets than any other team in Ligue 1 this season.
- Zlatan Ibrahimovic averages a goal every 81 minutes in Ligue 1 2015-16; his best ever tally in a season with Paris.
- Pierrick Capelle has scored two goals from his last three shots in Ligue 1. He scored a goal in each of his last two games.