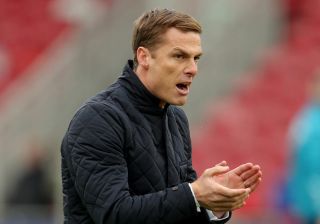 Boss Scott Parker believes Fulham have proved they have the character to stay in the promotion mix after leaving Middlesbrough with a point.

Parker was delighted with the way his side climbed up to fifth with the goalless draw, having successfully held struggling Boro despite playing 73 minutes with 10 men.

Fulham goalkeeper Marek Rodak was red-carded by referee Peter Bankes in the 17th minute for deliberate handball when he came rushing out of his area to stop Jonny Howson from going through.

But Fulham, who could have won the game had Aleksandar Mitrovic turned a second-half header home, battled away to keep Middlesbrough at bay and send their hosts into the relegation zone.

Parker said: “It’s probably the proudest I have been of my team since sitting in this position.

“I have been in this job for six months and when you look at this division we top most of the stats, but what a number can’t measure about the players is the desire, passion and effort and a mentality about them which is going to define us.

“I think their first effort on target was in the last attack of the game. The players need to know how big of a moment this is.

“Marek said it hit the top of his shoulder. I have not seen it again. It would be unfair on me to comment. We will appeal if we need to appeal.

“That was the turning point. With 11 men we were very good. We showed a real quality about us, looked every bit a team that would go and win the game.

“We had to show a different side to us. We also had that threat, we looked like we could cause them a few problems.”

While Fulham look upwards, Middlesbrough have a fight on their hands.

Boss Jonathan Woodgate said: “I’d have preferred it to be 11 v 11, I know that sounds strange.

“That’s because we had the game plan set out for how we wanted to play and I thought we executed that well and we had chances before he was sent off and once he was sent off, especially after half-time, we sat back and didn’t have the creativity in the team to break it down, it’s as simple as that.

“I wanted them to move the ball quickly through the pitch and they were taking time with their passing, they weren’t moving it the way I wanted them, from side-to-side quickly and getting balls into the box, that didn’t happen.

“We lacked that creative edge to break them down. From what I saw, I haven’t seen the replay, was it a red? I wished he’d stayed on.

“What plusses can you take out of that? Before the game would you have taken a point against Fulham? Probably, because they are a really good team.

“But when you have the opportunity then it turns itself on its head and that’s an opportunity missed because they went down to 10 men. We’ve got to capitalise on that.”