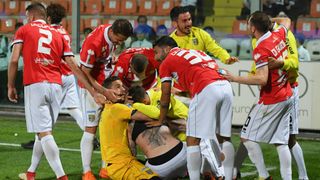 Parma have secured their third straight promotion to complete a sensational return to Serie A with victory over Spezia.

Bankruptcy forced Parma to reform in 2015, with the club promoted in each of the previous two seasons.

But their latest promotion came in spectacular fashion after a stunning own goal from Foggia's Matteo Rubin looked set to deny Parma.

Frosinone began the last day of the season in pole position to join Empoli in sealing a place in Serie A, needing only a home win against Foggia.

But after they fell behind to Fabio Mazzeo's first-half goal, Fabio Ceravolo's strike looked set to send Parma back to the big time.

Frosinone levelled through Luca Paganini's header in the 68th minute and they were soon in front, a moment of madness from Rubin seeing the Foggia player lash a corner into the roof of his own goal.

Roberto Floriano spared his team-mate's blushes with a last-minute equaliser for Foggia, though, leaving Parma - 2-0 winners after Amato Ciciretti struck in the second half - to celebrate another promotion and their Serie A return.