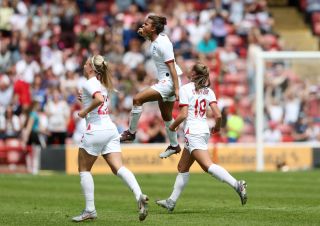 Parris – a few days after completing a move to Champions League winners Lyon – struck the opener just before the break in the penultimate match for England ahead of the World Cup in France.

Her former Manchester City team-mate Jill Scott, the captain for the afternoon, added a header in the 59th minute.

Neville, whose side performed unconvincingly at times, said of Parris: “The kid has had such a big 10 days in her life.

“You think about the girl from Toxteth who is now going to be living in France, has changed clubs, the first time she’s moved away from home, big emotional strain on that, on anyone. I know it myself from moving abroad.

“So we wanted to protect her today. But she’s a goal threat, she has goals in her.

“I need to make sure that we conserve that energy that she’s got. She’s buzzing around, she wants to train 27 hours a day, and we just need to make sure we manage her well because the World Cup is the biggest thing in her life, she’s dreamt about it all her life and she wants to go there and make a real impact.

“She’s that type of player who could go there and become a world star. So we just need to protect those jewels that we’ve got.”