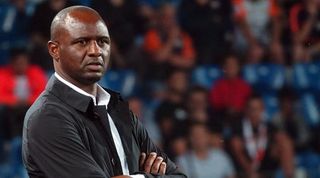 Vieira was linked with a return to north London following the sacking of Unai Emery in late November.

And Vieira says that although he held talks about succeeding Arsene Wenger in 2018, there was no chance of him re-joining Arsenal this time around.

"No, but there is no place in my mind to have those kind of conversations," he told the Daily Mail.

"My focus is here [at Nice]. This project suits who I am and what I want to achieve.

"This rumour about the Arsenal job is not something that bothered me. I don't know what the future holds but that is why I don't want to put my brain somewhere that doesn't exist.

"It was just a conversation about my situation, where I am, what is the next step," he added of his talks with the Arsenal hierarchy following Wenger's departure. "Nothing came of it."

Vieira played under Wenger for nine seasons, before the midfielder left Highbury for Juventus in 2005.

And the Frenchman says he learned plenty from his compatriot during his time as an Arsenal player.

"Calmness," Vieira said when asked to name Wenger's best quality. "Even when Arsene was in a difficult period, he remained at the same level. It was not like when we were winning he was higher or when we were losing he was low.

"That is something I really like and it's important because as a player it gives you confidence. But all the managers I had, from Wenger to Jose Mourinho to Roberto Mancini, knew the players and knew how to connect with them."