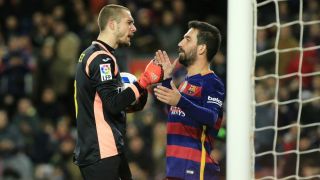 Espanyol goalkeeper Pau Lopez insists he did not deliberately attempt to injure Lionel Messi during his side's defeat to Barcelona.

The 21-year-old stood on the ankle of the Argentina star after a collision between the two following a cross from Barca midfielder Arda Turan in the second half of Wednesday's Copa del Rey tie.

Despite Pau appearing to glance down at Messi's leg before stepping on him, he is adamant he was making no attempt to hurt the 28-year-old during what was an ill-tempered derby clash at Camp Nou.

"That I came out there was just a reaction," he said, as quoted by AS. "It's all been blown out of proportion.

"It was just a incident in the game. I got hit in the face as well, these things happen in a game. I'd never go out on to the pitch to hurt a colleague."

Espanyol had two players sent off and Luis Suarez could face punishment after he was understood to goad some of the opposition players in the tunnel after the match.

But Pau maintains he relished the chance to face Espanyol's fierce city rivals despite their 4-1 defeat, adding:  "I enjoyed this match more than any other I have played in. I enjoyed it like I was a kid.

"When the whistle goes the match ends and we are all colleagues. If there were Barcelona players who didn't want to shake my hand that's their problem. It's good to shake at the end of a match though because we are all professional colleagues.

"For anyone who comes through the youth system, playing against Barca is special. I'm happy to be able to wear the blue and white shirt and play in games like this."

Gerard Pique caused a further storm when he took a swipe at Espanyol's self-proclaimed title of 'the marvellous minority', but Pau refused to be drawn into a spat with the Spain international.

"We know Gerard, he's someone who likes people to talk about him. He won't get an answer out of us," he added.