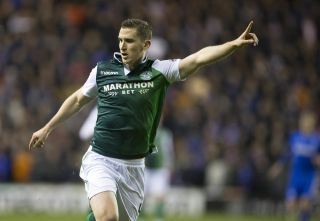 The build-up to this fixture was afforded a sense of perspective when Accies boss Brian Rice acknowledged that he had relapsed in his ongoing struggle with gambling addiction, showing admirable courage to self-report his breaches of the Scottish Football Association’s regulations.

The Scottish football community has rallied behind Rice, while he has received unwavering support from the Hamilton hierarchy.

And a largely impressive performance by his charges in Leith underlined their own appreciation and respect for their manager, deservedly taking the lead through Alex Gogic in the first period.

However, Jack Ross’ men responded after half-time and ultimately claimed all three points courtesy of efforts from Christian Doidge and Hanlon.

Accies were the dominant force in the first 45 minutes, with a dangerous Scott McMann delivery fizzing across the face of goal and a Markus Fjortoft header narrowly clearing the crossbar in the opening five minutes.

The deadlock was deservedly opened when a fine McMann corner found Gogic completely unmarked at the far post, allowing the towering Cypriot to head home his maiden goal of the campaign.

Hibs’ first-half showing was toothless, ponderous and sloppy, and Blair Alston was inches away from doubling the visitors’ advantage when he latched onto a wayward Melker Hallberg pass and shot narrowly wide from the edge of the box.

Vykintas Slivka and Hallberg were hooked for Stephane Omeonga and Joe Newell at the break as Hibs head coach Ross rang the changes.

Hibs finally sparked into life when a Fjortoft slip in the box presented Flo Kamberi with a great chance, only for Owain Fon Williams to make a superb point-blank save to deny the frontman. The Welshman then superbly smothered the follow-up from his compatriot Doidge.

However, Doidge did restore parity just after the hour mark. A Kamberi pass sent Martin Boyle scampering through on goal and, although his effort struck the post, the striker was on hand to poke home his 11th of the campaign.

Hibs had a superb opportunity to complete the comeback when Daryl Horgan found himself free in the box but Fon Williams was on hand to make another fine save.

That would prove a temporary reprieve, however, as Hanlon met a sensational Boyle delivery and thundered a header into the net four minutes from time.