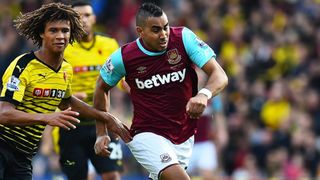 West Ham's Dimitri Payet has vowed to come back stronger after being ruled out for up to three months with an ankle injury.

The France attacker suffered the blow during West Ham's 1-1 draw with Everton on Saturday.

Payet had been enjoying a strong first season at Upton Park, scoring five goals in 14 appearances across all competitions, and is confident he can be even better when he returns from a lengthy spell on the sidelines.

The 28-year-old posted a video of himself sustaining the injury in a heavy tackle from Everton's James McCarthy on Instagram with the caption: "Hey guys just a little feedback just wanted to say that I'm recovering. I'm gonna work even harder and I will be back stronger. See you soon Hammers."