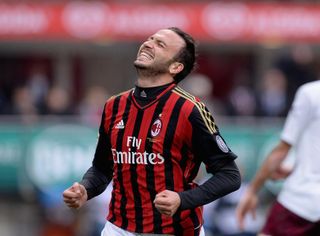 Clarence Seedorf's men take on Inter at San Siro this weekend in a game that could have a substantial bearing on the race for UEFA Europa League places in Serie A.

Milan's five game-winning streak was brought to an end with a 2-0 defeat to Roma last Friday, a result that leaves Seedorf's side in 10th with three games still to play.

However, Milan are just a point behind Torino in sixth, a position that is likely to result in Europa League qualification due to Napoli and Fiorentina's participation in the Coppa Italia final.

A win over fifth-placed Inter could boost Milan's hopes of European football in 2014-15 and Pazzini, who crossed the divide to join from Inter in 2012, feels that securing local bragging rights is even more important at the end of a tumultuous season.

"This is the start of a very important week. We're coming off the back of a defeat so we need to prepare in the best possible way," Pazzini told Milan Channel.

"The derby is always a unique fixture. We're behind and there isn't long to go before the end of the season.

"We need to train in the best possible manner and give our all. I always want to do well as a former Inter man. I've never scored in the Milan derby and it would be nice to end this taboo.

"We want to give the fans the joy of a victory in the derby, especially after this tough season in which we've been in a position that Milan isn't used to.

"This derby could be a chance for us to satisfy not only ourselves but also the fans and the club.

"We'll try and get an important victory as there are only three games left to play.

"I don't look at the league table, but we need to pick up as many points as possible and then we'll see what we can do. The objective in these three matches is to get nine points."