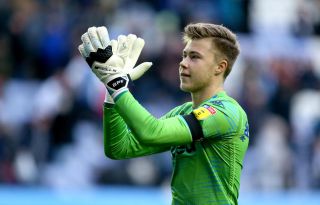 Bailey Peacock-Farrell wants to stay at Leeds but said he will consider his options if he cannot regain the number one spot at Elland Road.

The 22-year-old goalkeeper has one year left on his contract and is expected to start talks on a new deal shortly, but admitted losing his spot to Kiko Casilla in January had left him worried that much of the progress he had made over the past two years could go to waste.

Peacock-Farrell made clear that staying at Leeds would be his first choice and said he is “looking forward” to starting contract talks, but it is clear he will be reluctant to sign a new deal while he remains on the bench.

“If I’m staying at Leeds I don’t see that there’s anywhere other to play that’s better, unless, obviously, the Premier League,” Peacock-Farrell said.

“When you look at the stature of Leeds, the level of club that it is, you can’t get anywhere better to play. I wouldn’t want to go anywhere else out of choice, to a certain extent.

“Obviously if I’m not going to play at Leeds then I’ll have to consider my options.”

Peacock-Farrell began the season as first choice for Marcelo Bielsa and kept 10 clean sheets in 28 appearances, but he watched from the bench as Leeds’ promotion bid ended in disappointment.

He has remained a regular for Northern Ireland and has kept three clean sheets in seven appearances for his country, but now worries he could find himself stalling.

“Everything that’s gone before, that is really kind of pointless if you don’t continue making those strides,” he said.

“You just relax and say it’s good I did that. If all of a sudden you don’t play next season you’re missing, you’ve gone nowhere.

“It’s not even levelling off, it’s taking a step backwards because you’re not maintaining the strides forward you expect and I hold myself to.

“The aim is to be playing football, I have to, for selfish reasons. I’m not one of those goalkeepers who’s maybe content with sitting on the bench and picking up a wage.”

Bielsa may have been the man to drop Peacock-Farrell in January, but the goalkeeper is happy to see the Argentinian commit to another season at Elland Road.

“It’s great to have the stability of the manager staying another year,” he said. “At Leeds we’ve had a lot of managers who have come and gone.

“So to have a manager like Bielsa, with his pedigree, remain at the club it is absolutely huge.

“You can see the progress that we have made under him and hopefully with him staying on as manager we can build on that next season.”

The league campaign may not have ended how he had hoped, but Peacock-Farrell is now looking forward to Northern Ireland’s Euro 2020 qualifiers away to Estonia and Belarus this weekend – having made himself Michael O’Neill’s number one if not Bielsa’s.

Northern Ireland began with back-to-back victories over these sides in Belfast in March, and now need the same on the road to give themselves a chance when they face Germany and Holland later in the year.

“Mentally, going into these games is fine because it’s a refresh almost,” Peacock-Farrell said.

“Your form in the league kind of gets forgotten about when you come away. It’s a different kind of vibe.

“It’s a switch, you go into international mode, you focus and I’m fully focused on playing. Hopefully I get to play. That’s what I enjoy the most.”