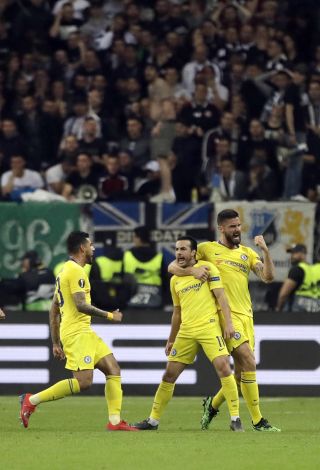 The Spain forward’s 12th strike of the season brought Blues parity in the tie – and a valuable away goal – after Luka Jovic headed the hosts into the lead.

Chelsea had to battle a hostile and raucous home crowd at the Commerzbank Arena, on a night where Ruben Loftus-Cheek shone.

Loftus-Cheek laid on Pedro’s goal and bossed midfield every time Chelsea dominated. The Blues’ biggest problem, however, was maintaining that kind of control.

Head coach Maurizio Sarri will probably be relatively satisfied with this result, but Chelsea will hope not to rue missed chances in next Thursday’s return leg.

Andreas Christensen was lucky to avoid a red card on tense night for the Blues’ stretched defence.

Sarri’s men felt pressure build through the absence of injured duo Antonio Rudiger and Gary Cahill, even before Eintracht powered into early control.

Jorginho had to be patched up after a clash of heads, sporting a sizeable bandage for the majority of the second half.

Olivier Giroud survived a furious Frankfurt appeal for a penalty, with the ball hitting the France forward’s body inside the area.

But despite all the setbacks and a worryingly sluggish start, Chelsea still merited the draw.

Sarri left Eden Hazard on the bench, insisting the Belgium talisman was too tired to be involved from the off, and that led to a timid start, the Blues in disarray at the back and unable to find any rhythm.

Christensen was rightly booked for a lunging tackle on Sebastian Rode, and then the unmarked home skipper David Abraham blazed over from the resulting free-kick.

Chelsea failed to heed the warning signs and leaked a poor goal in the 23rd minute to compound their poor start.

Filip Kostic cantered down the left after Giroud ceded possession cheaply, before whipping in a neat cross.

A stooping Jovic flicked the ball to the far corner, but failed to add power to his effort. So when the ball bounced past Kepa Arrizabalaga and into the net, Chelsea looked stunned.

Christensen’s nervy night continued unabated when he upended Mijat Gacinovic as the pair tangled battling for a header.

Referee Carlos Del Cerro Grande opted not even to award a foul however, in a huge reprieve for both Chelsea and their Denmark defender.

Finally Chelsea settled though, Loftus-Cheek drilling just wide and Willian cutting back when space had opened up for a shot.

And just when the Blues feared being thwarted in the first half, Loftus-Cheek teed up Pedro and the Spaniard blasted home.

Jorginho returned to action after a nasty-looking clash of heads with Rode, pressing on after being bandaged up.

Loftus-Cheek fired over from a gilt-edged opening after exchanging passes with Pedro on a fine Chelsea break, before David Luiz saw a whipped free-kick tipped to safety via the bar from home goalkeeper Kevin Trapp.

Chelsea raised the tempo again, Hazard stepping into the fray and Loftus-Cheek continuing to boss the game.

Luiz flicked Hazard’s free-kick goalwards, only for Trapp to pull off a smart save.

Eintracht remained dangerous on the counter though, and Chelsea even avoided censure despite strong home claims for a Giroud handball following a corner.

Abraham headed over from a corner at point-blank range, and then Makoto Hasebe was hounded out by N’Golo Kante after Chelsea lost possession just outside their own box as the Premier League side came away from Germany with a draw.