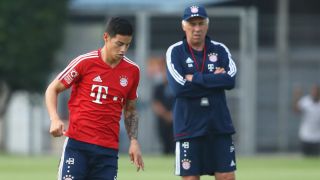 Jose Pekerman said he is not surprised by Bayern Munich's decision to sack Carlo Ancelotti as the Colombia head coach reassured star James Rodriguez over his future at the Bundesliga champions.

Ancelotti was instrumental in luring James to Bayern on an initial two-year loan deal from Real Madrid, having signed the Colombian attacker during his time in charge of Spanish giants.

However, Pekerman insisted James' future in Bavaria does not depend on the departed Ancelotti ahead of Thursday's World Cup qualifier against Paraguay.

"I'm not surprised by Ancelotti's departure, one could see Bayern had some problems during the beginning of this season," Pekerman said. "You could feel they weren't comfortable at work.

"We spoke about it also with James. I asked him to be calm, because he was going to a great club, no matter the fact that the coach that was with him in Real Madrid and took him there… he was there thanks to his condition, to his capacities, because Bayern Munich, beyond the coach, saw a player that could bring a lot to the team.

"[I asked him] not to be conditioned by a situation because he had to do what the club expected. I think this won't change a thing on his attitude, on his level, and he's 100 per cent ready to make a great match tomorrow."