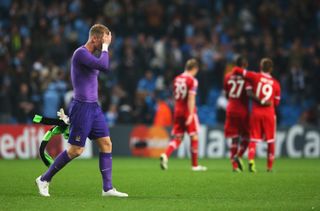 The England international goalkeeper has come under fire for his performances for both club and country this season, and endured a difficult game on Wednesday as City were comprehensively beaten by Bayern Munich in the UEFA Champions League.

Hart was beaten at his near post by shots from Franck Ribery and Arjen Robben as Bayern cruised to a 3-1 victory at the Etihad Stadium, leading to speculation that Pellegrini may consider taking him out of the firing line for Saturday's clash with Everton.

However, while acknowledging the need for Hart to pick up his level of performance, the Chilean insisted he has faith in the 26-year-old's ability.

"Of course he feels that he didn’t do very well (against Bayern), but I think he doesn’t have any problem. We hope he will recover from the game,” he said.

"Joe knows he must improve the way he is playing, but he knows he has our trust."

City have come in for some criticism for their inconsistent displays this season, and followed up their 4-1 derby mauling of Manchester United by twice surrendering the lead in a 3-2 reverse at Aston Villa last weekend.

Pellegrini believes his team deserve more than their haul of 10 points from six games, but warned his players to expect a tough game against unbeaten Everton, against whom City have lost nine of their last 12 top-flight meetings.

"Everton is the only team unbeaten in the Premier League and they're playing very well, but I hope we'll have a good game and get three points," he added.

Martin Demichelis (knee) remains sidelined for the game, while Stevan Jovetic is also unavailable due to a "couple of small problems", according to Pellegrini.

The ex-Malaga manager also confirmed that Jack Rodwell (hamstring) has resumed full training and is fit, but will not feature against his former club on Saturday.