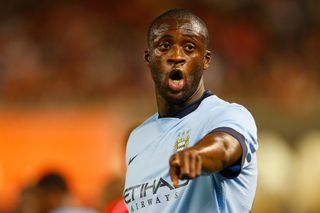 The Ivory Coast international has borne the brunt of criticism at times this season after failing to reach the heights that saw him score 20 Premier League goals for the champions last term.

It follows a close-season of uncertainty that saw rumours Toure could be set to a big-money exit from the Etihad Stadium following a reported falling out with the club.

However, Toure stayed put and he finally got off the mark in the top flight in the 2014-15 campaign by scoring in City's 2-0 win at Aston Villa on Saturday.

City manager Pellegrini is adamant that Toure has always been fully committed to City and believes personal problems off the pitch, including the death of his brother Ibrahim in June, may have had an impact on his performances.

"Maybe [he had trouble] with personal problems but he did not have any problem of commitment with the club or anyone at the club," Pellegrini said.

"He has a lot of different things in his private life but he did not want to go anywhere and is absolutely committed to this club.

"Last season Yaya also played bad games and good games but he scored so many goals that everyone talked about that.

"We are starting the season and the important thing is that Yaya knows that he must improve every game. He is trying to do it so I don't have any concern about him."

Pellegrini also praised the impact of playmaker David Silva, who put in an impressive showing at Villa Park.

"I think that David worked very well," he added. "It is the [type of] game where David must be very important to try and find the space, with so many legs defending in their own box.

"I think he played a very good game, same as [James] Milner, same as [Frank] Lampard and both strikers [Sergio Aguero and Edin Dzeko] who made all the movement so that David could find them."