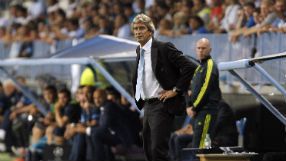 The Qatar-owned team knocked three goals past Anderlecht without reply in their Group C clash in Brussels on Wednesday, including a pair of stunners from midfielder Eliseu.

Malaga also thumped Zenit St Petersburg by the same score at their Rosaleda stadium two weeks ago and top the group on six points, two ahead of seven-times European champions AC Milan, who visit Malaga on Oct. 24.

"Six points from six is significant but it's not definitive because as quickly as you accumulate points in a group you can drop them too," Pellegrini said on UEFA.com.

"We maintained a good approach tonight. We were at quite a high level as a team, playing collectively as opposed to individually," added the Chilean, a former Real Madrid and Villarreal coach.

"This is not a miracle. It's based on hard work, compromise and is helped by the unity of our supporters."

Malaga had an uncertain summer, marked by delays in wage payments, the departure of some of their best players and rumours owner Sheikh Abdullah Bin Nassar Al Thani was preparing to sell up after only two years.

They now appear to have put the crisis behind them after Al Thani reaffired his commitment to the club, helping to kick off a process of restructuring designed to help them become economically viable.

Their performances on the pitch have been impressive and they are third in La Liga behind leaders Barcelona and second-placed Atletico Madrid thanks to four wins and two draws in their six matches.

"Welcome to the footballing elite," he said at his post-match news conference on Wednesday.

"We can conclude from tonight that we are still far, far away from joining it. The respect I already had for Malaga has only increased after that.

"You have to be really at the top of your game to do something against such a fantastic side and Malaga were top. We certainly were not."