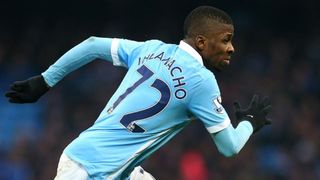 Manuel Pellegrini is prepared to add Kelechi Iheanacho to Manchester City's Champions League squad and ranks the forward as one of the most talented youngsters he has coached.

Teams in the last 16 of Europe's premier club competition will have an opportunity to alter their 25-man squads for the knockout stages next week and Iheanacho, who missed the cut for City's group-stage campaign, further pushed his case with an FA Cup hat-trick at Aston Villa on Saturday.

The 19-year-old has eight goals across all competitions in an increasingly impressive debut season and appears to be an obvious choice to bolster Pellegrini's attacking options ahead of the tie against Dynamo Kiev, with Kevin De Bruyne (knee) and Samir Nasri (hamstring) definite absentees and fellow striker Wilfried Bony nursing a calf problem.

"It's a decision we are going to take during this week before the set date that we can do it. But of course he pushed a lot," Pellegrini said, as quoted by the Manchester Evening News.

"We need him because Bony is also injured so that is just one [fit] striker [Sergio Aguero]. We'll see – not because of the three goals, but because we need another striker.

"We'll see, we'll talk it over with the doctor. Samir and Kevin will be out until the end of March. I will see during the week."

Pellegrini went on to liken Iheanacho's emergence to those of Javier Mascherano, Santi Cazorla and Isco, who he coached at River Plate, Villarreal and Malaga respectively during their formative years.

"We have a young player who is very important for our club," he added. "I've had the opportunity to do it with Santi Cazorla, with Isco, with Mascherano – so I know we have a player that deserves space in the squad and I think that Kelechi can do it.

"But it's just one game. I'm not impressed because he scored three goals, I'm very happy because he improves in every way that he works with the squad."