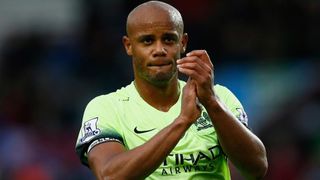 Vincent Kompany's injury nightmare at Manchester City is no closer to a conclusion after manager Manuel Pellegrini announced his captain could be sidelined until the "last part of the season".

Club captain Kompany has been restricted to eight Premier League starts for City during the current campaign due to persistent calf problems.

His latest attempt at a comeback, as a second-half substitute during the 4-1 Boxing Day win over Sunderland, was cut short after nine minutes as injury stuck once more.

Speaking ahead of his team's home match against Everton on Wednesday, Pellegrini said his staff were no closer to finding the root of Kompany's woes and tellingly listed him alongside long-term hamstring victim Samir Nasri when running through his injury absentees.

The Chilean will be without midfielder Fernandinho, one of City's most consistent performers during a patchy 2015-16, for the match, while Wilfried Bony (calf) and Eliaquim Mangala (hamstring) remain sidelined for the title challengers.

"Kompany, Mangala, Fernandinho, Nasri and Bony – those five players are injured and not fit for tomorrow's game," Pellegrini said.

"Mangala tried to work yesterday with normality but he couldn't. He had some pain still in his muscle – for him, it's best to wait a bit more.

"It's the same for Fernandinho and Bony. For Kompany and Nasri, it's longer.

"Vincent tried a lot of different things to try and find the cause of the injury so we have no update at this time."

Pellegrini does expect to welcome back influential midfield duo David Silva and Yaya Toure for the visit from Roberto Martinez's side after the pair were left out of the matchday squad for Saturday's 3-0 FA Cup win at Norwich City.

"It was good to rest both of them as they're in the squad list for tomorrow," said Pellegrini, who hinted that he will shuffle his pack.

"We'll see who will be in the XI but we have to play two games so close together so we'll see.

"Silva is 100 per cent fit – maybe it's a risk for him to play [every time] Wednesday to Saturday."

Everton were 2-1 winners when the teams met a week ago in the first leg of their League Cup semi-final at Goodison Park.