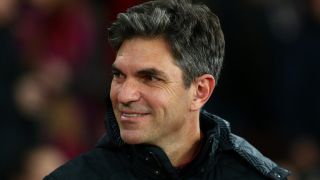 Southampton manager Mauricio Pellegrino insisted he had no fear of being sacked despite his side's 2-1 loss to Crystal Palace on Tuesday.

An 80th-minute goal from Luka Milivojevic saw Palace stun Southampton, who fell to 17th in the Premier League.

Southampton are winless in nine games and in danger of relegation, but Pellegrino said he held no fears over potentially losing his job.

"I feel fear for other things, not about football. In football I don't feel fear," he said.

"I feel responsible, I am disappointed because we lost, but it's not fear. I feel fear for other things.

"The big risk in our job is to work in this job. I prefer to assume risk; I prefer to make mistakes instead of [not] doing anything. Everybody, we are responsible."

FULL TIME: 1-2 The visitors come from behind in the second-half to secure all three points. January 2, 2018

Shane Long had put Southampton ahead at St Mary's, but James McArthur and Milivojevic gave Palace a crucial win that lifted them into 14th.

Palace manager Roy Hodgson, who revealed Jason Puncheon and Scott Dann were likely to miss the rest of the season due to knee injuries, was delighted with the win over Southampton.

"In the first [half] we looked like a team that had a very tough game a couple of days ago and the pitch was a little bit heavy as there has been a lot of rain and the grass was a little bit long, so that didn't help the ball to fizz across the surface," he said.

"I thought the heaviness of the pitch and our legs meant that the first half was nothing like the one we wanted to give, but in the second it was almost exactly it.

"We were very dominant and by the time we'd equalised we'd had enough of the ball in the Southampton final third, and it was great to get the winner and take three points."