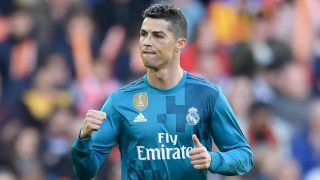 Cristiano Ronaldo scored the 100th and 101st penalties of his senior career in Real Madrid's LaLiga clash with Valencia on Saturday.

The 32-year-old broke the deadlock at Mestalla from the spot, having drawn a clumsy foul from Martin Montoya inside the area.

He then buried his second goal from 12 yards before half-time after Montoya bundled over Karim Benzema.

The forward has now reached 101 successful penalties, with 94 scored for club sides and seven for Portugal.

He also has 12 goals against Valencia in his last 10 league matches against them.