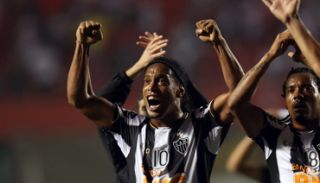 Ronaldinho's team were 1-1 in the second leg and 3-3 on aggregate against their Mexican rivals when Tijuana midfielder Pablo Aguilar was brought down chasing a high ball into the penalty area two minutes into added time in Belo Horizonte.

Victor dived to his right as Colombian Duvier Riascos blasted his spot-kick down the middle but the goalkeeper stuck up his left foot and kicked the ball clear, saving the Brazilian side from a humiliating home defeat.

"It was the most important save of my life, at a crucial moment," Victor told reporters. "We didn't play well today... so we must draw lessons from the game to seek the title we so desire."

The favourites never had it easy in the tie against the upstart tournament newcomers from the northwestern Mexican border town and ended up going through on the strength of their added-time equaliser in the 2-2 draw in last week's first leg.

The Mexican side went in front in the 25th minute at the Independencia when striker Riascos volleyed home defender Juan Carlos Nunez's cross into the middle of the Atletico box.

The home side equalised five minutes before half-time when the Tijuana defence failed to intercept Ronaldinho's free-kick from the right, leaving centre back Rever to tap in at the far post.

Ronaldinho hit the woodwork three minutes later in an absorbing contest highlighted by end-to-end action with Tijuana, the better side on the night, needing a win or at least a 3-3 draw to advance.

Tijuana had a good chance to regain the lead in the 69th minute but Victor blocked substitute Bruno Piceno's effort with his feet after some good work by striker Fidel Martinez.

As Tijuana pressed for the goal that would put them though in the final quarter of an hour, midfielder Fernando Arce thumped Victor's bar with a free-kick.

At the other end, Tijuana goalkeeper Cirilo Saucedo did well to keep out a close-range shot from substitute Luan in the 88th minute before the tie concluded in dramatic fashion with Victor's late heroics.

Rever was sent off at the final whistle for protesting.

Atletico will meet Newell's Old Boys of Argentina while Paraguayan three-times champions Olimpia face Independiente Santa Fe of Colombia in the other semi-final in July after a break for the Confederations Cup in Brazil.