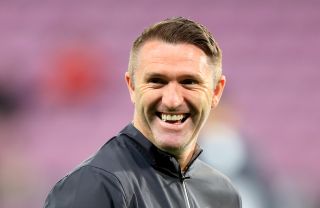 YouTube star Chunkz missed the decisive penalty as the Rest of the World XI claimed victory over England in Soccer Aid 2020.

Despite Robbie Williams’ notable absence, the game kicked off in novel fashion for Soccer Aid, with all players taking the knee in an empty Old Trafford stadium.

Although the goals were not free-flowing the tackles certainly were including a memorable mistimed slide from Gareth Barry on Jeremy Lynch.

There was a long wait for the first goal, but Robbie Keane struck for the Rest of the World in the 54th minute, curling the ball in off the post from the centre of the box.

However, once the deadlock was broken, the second came in quick succession, as Yung Filly levelled the tie less than two minutes later.

With the shootout needed to determine the victors for the second successive year, Rudimental’s DJ Locksmith was the first to miss for the World XI to give England the advantage.

It took a while for victory following Chunkz’s penalty miss to sink in, but the World XI celebrated after maintaining their flawless shootout record in the fixture.