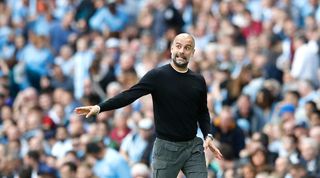 Pep Guardiola has defended his Manchester City squad and addressed criticism that he is a "fraud" following his side's 3-2 loss to Norwich.

The Premier League champions suffered a shock defeat at Carrow Road on Saturday to fall five points behind Liverpool.

Centre-backs John Stones and Nicolas Otamendi were singled out for criticism after City conceded three goals in the league for the first time since December.

But Guardiola has rushed to the defence of his players, saying that they are the reason for his lofty reputation in England.

“How many games have John and Nico played in the three seasons?” he responded, when asked whether he would look for a new partnership in the heart of the defence.

“How many games have they played with Kyle Walker? Pah … a lot. Also, [Aymeric] Laporte made a mistake in the quarter-final of the Champions League, against Tottenham, when he never made a mistake before.

“We have to see what the problems are. If [the players] want to take a step for the club for themselves we are going to solve it.

“If today you believe I have doubts in my team because we lost a game... They gave me all the prestige I have in England.

“In the first season it was ‘fraud Guardiola, Fraudiola’, and how it was not possible to play this way because you have too many tackles [in the Premier League]. It was these players who gave me the prestige I have and [talk] all round the world about how good a manager I am.”

Manchester City face Shakhtar Donetsk in the Champions League on Wednesday, before meeting Watford at the Etihad Stadium on Saturday.