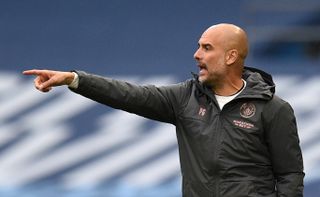 Silva scored a superb free-kick and set up the first and last goals of a one-sided Premier League victory for Gabriel Jesus and Raheem Sterling at the Etihad Stadium.

The 34-year-old is leaving the club at the end of the season after a decade’s outstanding service and, although all games are currently being played behind closed doors, Guardiola is determined his countryman gets a fitting farewell.

The City manager said: “It is not the game today – which was incredible – but what he has done over 10 years.

“When the people come back to the Etihad Stadium we will do a farewell game for one of the legends of this club.

“He is maybe the best in the small spaces. Moving between the lines I have never seen anyone like him.

“He has come back from lockdown in incredible form and rhythm. If he decides to play on he can play anywhere – there is no doubt about this.”

Riyad Mahrez was also on target and there was a Federico Fernandez own goal as City bounced back from a surprise loss at Southampton to overwhelm Newcastle.

Guardiola said: “At Southampton I had no doubts about the way we played but this game is about winning.

“Now we have four weeks to finish second, score a lot of goals. We want to score goals, respect the football and prepare well for Arsenal and (Real) Madrid.”

Guardiola admitted the club still have work to do to secure his services.

He said: “He has one more year on his contract. If they want him they must call him and we are going to try to convince him to stay here for many, many, many years.

“I am confident he will stay but at the end it is his decision. We want him but if he doesn’t want to stay we cannot do anything else. He knows, his agent knows, his family knows that we want him.”

Newcastle’s cause was not helped by a raft of injuries with manager Steve Bruce forced to make six changes.

Bruce, however, conceded that his side were outplayed.

He said: “We are disappointed but I have to say they were far too good for us. We have got to be brutally honest and say we did not do enough to lay a glove on them.

“We knew we were up against it. We can’t be without six or seven of our better players, especially when you come to a place like this, but I don’t want to use that as the excuse.

“We have to be better than that. It was too easy for them from the first whistle to the last. If we play like that here we are going to get beaten and we were.

“They were far too good for us in all departments but the manner of it upsets me greatly. I wanted us to put on more of a show than we did.”