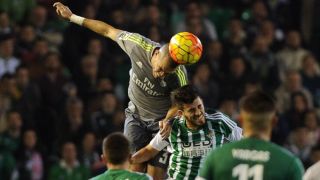 Real Madrid defender Pepe believes it will be a long and tough road ahead for his side as they seek to win the La Liga title.

A 1-1 draw on Sunday at Real Betis has done little to aid that cause, with Real now four points behind fierce rivals Barcelona, having played a game more than the Catalan giants.

"It's going to be tough. The league is complicated," the Portuguese defender told Movistar Plus.

"We have to keep working hard and fighting. We deserved to win today, but the opponents played their part too and they must be given credit."

The draw marks the first time Real have dropped points under new manager Zinedine Zidane and, despite scoring 10 goals in his first two games, Pepe said the team is still coming to terms with his style.

However, Pepe suggested there was an element of luck for Betis in securing the draw.

"We wanted to win. Betis' goal was a wonder strike, but it was very fortunate. We tried to turn it around. We pinned them back in the second half but we could only find an equaliser," Pepe continued.

"They only scored once, which was lucky.

"We made a good start to the game, coming out with intensity, and they didn't create any chances. We worked hard but were unlucky."

Madrid's now face a visit from Espanyol next Sunday as they look to keep the pressure on Barcelona and Atletico Madrid at the top.